Australian duo VOWWS, a band that has quickly emerged as a fixture in Sydney’s underground music scene, is generating some buzz over here in the U.S. with their own unique blend of industrial and electronic pop to post-punk and metal. The group, comprised of Matt and Rizz, recently released a single called “Heartbreaker” that Matt described as a “window into casual insanity. It’s war music for peaceful people cos when everything looks the same, it’s harder to choose.”

In anticipation of their stop at the DNA lounge in San Francisco this coming Friday March, 10, we spoke with Rizz about how the band formed, what are some of their influences and why they decided to leave the land down under for the sunny beaches of Los Angeles, Calif.

1. How did you guys begin collaborating?

We met at music school in Sydney and our first project was a metal band called Open The Gates.

2. I read somewhere that you describe yourselves as “Pop Demons,” can you explain why?

You call yourself a lot of shit over the years, I don’t care for pop demons anymore. We were going through a phase.

3. What are you trying to accomplish with your music? 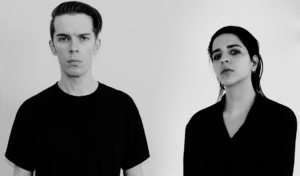 4. Why did you decide to stick to being a duo and not bring in more members?

We played in bands for 10 years before we became a duo. It’s hard finding people you can tolerate for more than 3 seconds you know.

5. Can you explain the name VOWWS?

It’s not really a word, so it kinda means whatever you want it to mean. Choose your own adventure.

6. Being from Australia, how do you think the music scene differs here from there?

There’s just so much more going on here. It’s a much larger country and smaller scenes can thrive let alone exist. Australia is rad and has a really unique artistic point of view… but there’s just no one there.

7. Why did you guys decide to move to Los Angeles?

Same reason as above.

8. I hear a lot of 80s goth influences in your music, but I’ve also read in the press that you’re highly influenced by horror movies. Can you tell me a little more about that?

It’s funny, neither of us ever really got into 80’s goth music so that’s weird to hear. We both grew up watching a lot of horror films and are super into the soundtracks in particular. You won’t hear that in the new stuff, we already scratched that itch with the first record. The new shit is gut busting.

9. You’re playing this Friday at the DNA Lounge. Have you played San Francisco before?

Many times, it’s one of our favorite cities to play. This is our first all ages show so I’m looking forward to meeting some kids.

London-based singer/songwriter Olivia Chaney recently followed up her 2015  debut, The Longest River, with Shelter, an album

When did you first become interested in playing music? Growing up, there was always an inclination

Outside Lands has announced the 2021 Night Shows lineup. This year’s version features 16 shows across 8 venues throughout San … More

After a period of careful consideration, the beloved roots music festival have unveiled their highly anticipated 2021 plans, which will be … More