Construction at the location previously occupied by the festival—the Great Lawn on the west side of the island—is part of the island’s multi-billion-dollar development that has forced producers to relocate this year’s event to a new site on the island’s eastern shore. Although it’s a new location, attendees can expect the unique atmosphere and charm of the festival to remain the same: amazing performers with no overlapping sets, art installations, sweeping views, some of the best cuisine the Bay Area has to offer, and more. The 60-foot Century Ferris Wheel and Silent Disco will return; however, this year they will be located on the pier jutting out from the festival grounds and surrounded by the Bay, affording festivalgoers a unique, new perspective. The eastern shore will bring new views of the Bay, Oakland cityscape, and the Bay Bridge, giving the East Bay its due. With this new site will also come an expansion of the VIP Area, including preferred viewing areas at BOTH stages and streamlined accessibility between stages.

Location details for next year’s move off of Treasure Island are still to come. Festival organizers are currently in the planning stages for 2017, and that information will be announced at a later date. “Since the inception of the festival in 2007, we’ve been aware that some day we’d have to move off the island,” says co-founder Jordan Kurland. “We’ll be relocating and evolving this event in 2017, but at its core, it will stay the same: an intimate and carefully crafted festival experience filled with incredible music performances. For now though, we’re grateful to have one final year on the island to give it a proper goodbye.”

Parking on the island during this year’s festival will be extremely limited to minimize traffic congestion. Guests are encouraged to use another travel option, such as the festival’s shuttles, which are increasing this year to provide frequent and reliable travel options for attendees. For the first time, the festival will now offer an East Bay shuttle, with location and pick-up times to be announced soon. Additionally, complimentary shuttles in San Francisco will be running again this year between the pick-up spot on Fulton Street between Larkin & Polk located one block from Bill Graham Civic Auditorium and the festival site on the island. Shuttles will run on a continuous loop throughout the day beginning at 11 a.m. each day of the festival, October 15 and 16. For more information on travel to the festival, visit http://treasureislandfestival.com/2016/getting-there/.

Single-day GA and VIP passes are on sale, as are weekend GA and VIP, available for purchase at treasureislandfestival.com. VIP perks include preferred viewing areas next to both stages, an exclusive tented lounge with full liquor bar, and special restroom facilities, as well as VIP food concessions and other amenities. 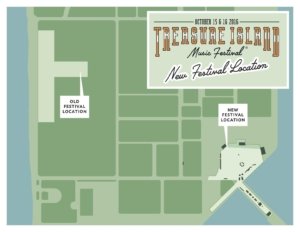 In a press release that went out today, the Treasure Island Music Festival (TIMF) announced the daily

Outside Lands 2019 came to a close yesterday, but the memories will remain. For the thousands

The Mill Valley Chamber has announced the full music lineup for its
Seal embarks on a 30th anniversary tour this spring with special guest
Cultural icon and original diva Madonna is making her way to the
Noise Pop Festival, San Francisco Bay Area’s premier independent music and arts
Coachella returns to the Empire Polo Club in Indio, CA for two weekends
This website uses cookies to improve your experience. We'll assume you're ok with this, but you can opt-out if you wish. Cookie settingsACCEPT
Privacy & Cookies Policy