The first round of dates for Taylor Swift’s Reputation Stadium Tour was announced this morning just days after Swift’s appearance on Saturday Night Live. It kicks off on May 8, 2018 in Glendale, AZ, and will make a stop in the Bay Area on May 12 at Levi’s Stadium in Santa Clara.

For Bay Area music fans wanting to snatch their tickets early, they will go on-sale to general public on Dec. 13. 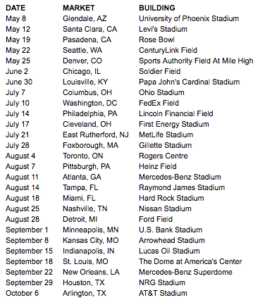