Bishop Briggs, the UK singer, and songwriter whose track “River” has amassed over 24 million global streams and soared to #3 on the Alternative chart is currently prepping for her first major headlining North American tour. In anticipation of her July 20 stop at the legendary Fillmore in San Francisco, she was gracious enough to chat with Music in SF about what’s in store for the tour, what it was like to open up for Coldplay last year, and what she thinks of San Francisco audiences.

So, I hear you’re preparing to go out on tour. Can you tell me a little about that?
I’m really excited. It’s my first headlining tour and we have SHAED and Manatee Commune opening, which I’m so excited for. And we’ve been rehearsing. I’m really excited to let people in and show a different side of me. And I hope they leave the show feeling sweaty, of course, from all the jumping; but most of all feeling like we made a connection and that they can relate to the things that I’m saying.

You have a stop in San Francisco. Have you played here before?
I have. I’ve actually played at the Fillmore where we’re headlining this time around. The last time I played here was when I was opening for Kaleo. San Francisco is always one of my favorite places to stop. It’s always the most hyped crowd and I feel very excited about everyone there.

When you’re in town do you have a little bit of time to visit what the city has to offer?
Well, it depends. But I think this time around hopefully we will at least spend a day there. I always end up in some sort of doughnut or Ice Cream shop every time that I’m there. I don’t know why.

I read that last year you opened up for Coldplay? What was that like?
I did. It was nine dates. It was incredible. We had only released a few songs when we got that crazy, crazy offer. I really wish there was a video of my face when I found out that news. But it was a dream come true. I mean I grew up listening to Coldplay and they are such an iconic band and group of people. Their fans are so supportive and kind and creative. So, it was an amazing experience.

How do you prepare for something like that?
Truthfully you can’t prepare for the stadium and I think that was something that I had to expect really early on. That I had to be in the moment and truly appreciate it for what it was.

Do you get stage fright at all?
Absolutely. Before I go onstage I do try to try to meditate, but it always results in me sitting in the corner of a room or pacing and holding my heart. So yes, I’m still working on that.

Can you tell me about your musical upbringing and when you decided you wanted to do this for a living?
I grew up listening to a lot of Motown music and for a short time in Japan, I was in a little gospel choir. And I guess the combination of those things was really inspiring. I think there’s this odd rite of passage that the minute you land in Japan you have to go to a Karaoke bar. And I would see my dad singing Frank Sinatra. There was just this joy and excitement and happiness in his eyes and I just wanted a piece of it. And so, for all that I can remember it’s all that I’ve ever wanted to do.

Do you write all your music?
I write with the producers behind the music, Mark Jackson and Ian Scott.

Can you describe to me the songwriting process?
It’s always changing. Sometimes I will have written some Emo poetry that I’ll bring in. Or some sample that one of us will play that will be inspiring. I remember one time I was in a coffee shop and I heard this really old school Motown record playing. I immediately put on my Voice Memo and I sent it to them because I thought it could be something cool to add to a song. To cut it up and see what we could create. So, it’s always changing, which is what I really enjoy.

What would you say are your main influences?
I love Alabama Shakes, the Beatles, and Chance the Rapper. Kanye West is a really big influence of mine.

In that song ‘River’ I hear a lot of Gospel and old Blues.
Yay! That makes me so happy.

As far as any big plans coming up beside this upcoming tour, do you have anything that you want to share?
Well, I’m really excited about the first part of the tour when we go to Coachella. It’s my first time going. And we’re also hoping to release some new music really soon.

Bishop Briggs will be performing at The Fillmore in San Francisco on 4/20/17. Music in SF will be there. Check back for a full review and photos from the show. 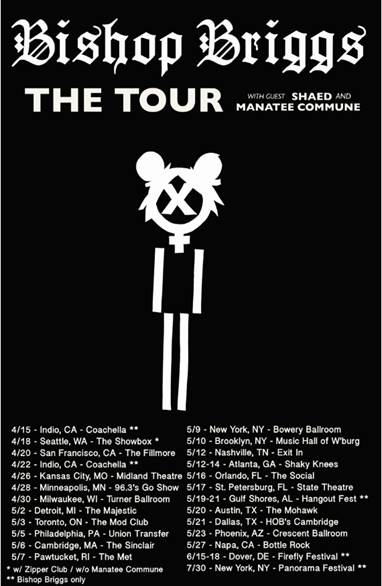 After 30 years, Brian Jonestown Massacre is still going strong. Last night at the Fillmore for

How does one describe the music of Jinjer…hmm…well, at first glance a balanced mix of hardcore

Day one of Outside Lands came to a close last night and boy did it not disappoint. The day was … More