I hope you all went and checked out VOWWS and White Lies last night at the Chapel in San Francisco. Word in town is that the show was off the chain. For those of you that may have missed VOWWS’ opening set here’s a little media for you about these guys from Australia.

“Their sound starts in your head and ends up in a seedy underground dance club after everyone has left. It’s music for a night that should have ended hours ago.” – Interview Magazine

“ ‘Losing Myself (Ft. Gary Numan)’ is a barrage of percussive bombs, an assault that rattles the heart as it pounds on. Synths drone and swirl like entrancing spells of their own, while guitars crunch and stalk triumphantly.” – Consequence of Sound

With their new single, “Heartbreaker,” VOWWS veer into the wrong lane – and smash backwards into Pop. The new single was released today, coinciding with their North American tour in support of British post-punk band White Lies.

A flash-grenade of musical justice, “Heartbreaker” opens with the layered ramblings of a mad man – before exploding into an urgent groove of cascading beats, vertical guitars and a guiding, screaming synth – a musical offering that pummels you over the head with a sick smile on its face.

“We wanted this song to be a window into casual insanity. It’s war music for peaceful people cos when everything looks the same, it’s harder to choose,” says Matt.

Heartbreaker was produced by the duo and Rhys Fulber (Front Line Assembly, Fear Factory, Youth Code). Their second album, the follow up to 2015’s ‘The Great Sun,’ is due mid-2017.

The “Heartbreaker” cover art is by Los Angeles based artist Jesse Draxler. 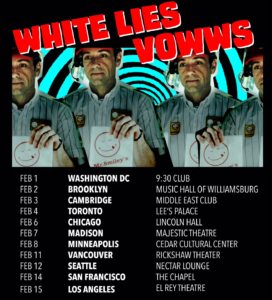 Australian duo VOWWS, a band that has quickly emerged as a fixture in Sydney’s underground music scene, is