Bold and brassy one minute and devastatingly sincere the next, Lizzo is an artist that defies easy definition. She’s a gifted rapper, a hair-raising gospel singer, a razor-sharp wordsmith, a classically trained flautist, and a passionate advocate for feminism and black empowerment. She’s a hard-touring road warrior who is equally capable of winning over audiences in London, Paris, New York, and her hometown of Minneapolis. She’s hilarious. She’s sweet. But don’t be fooled: She’ll also eat you alive.

The Minneapolis native broke onto the scene with her hit, “Good As Hell.” Featuring lyrics like, “Hair toss, check my nails/baby how you feeling/feeling good as hell” and the occasional “Yas, Lord,” the catchy track has become a self-love and empowerment anthem. After hearing the song, comedian Samantha Bee invited Lizzo on her show the night after Donald Trump was elected, in which she titled the segment “Lizzo Saves Us All.” She was also recently featured on the cover of the Los Angeles Times Sunday Arts section where they call her “one to watch.” I’ve included some additional press highlights below as well. 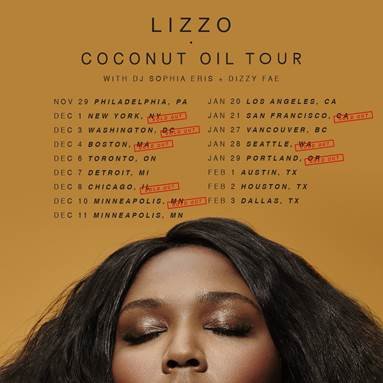 Lizzo is a woman on the rise. Although the flamboyant singer with the
Highly Suspect is playing the Independent tonight, Friday Sept. 30. Check out the

Billie Eilish – No Time to Die

PRIMUS Announces Rush Classics Tour with Stop at the Greek

Primus will pay homage to prog-rock legends Rush this summer with a stop at the Greek Theater in Berkeley. Called … More
02

Perry Farrell and his Cosmic Crew Land at the Fillmore (SLIDESHOW)

Perry Farrell introduced his latest musical venture to concert attendees at the Fillmore last night. It was … More
03

The Weeknd has announced his new headline world tour,
Primus will pay homage to prog-rock legends Rush this summer with a
Rage Against the Machine has announced a worldwide headline
(PRESS RELEASE) January 27, 2020 – The sixth annual
Guns N’ Roses have announced some North American tour
This website uses cookies to improve your experience. We'll assume you're ok with this, but you can opt-out if you wish. Cookie settingsACCEPT
Privacy & Cookies Policy