The epicness that is KAABOO Del Mar has just released its 2018 music and comedy lineup for the 4th annual event happening September 14-16, 2018. Bands performing this year include Foo Fighters, Imagine Dragons, Katy Perry, and legendary rock icon Robert Plant and the Sensational Space Shifters as the main headliner. They will be joined by Halsey, Post Malone, Wiz Khalifa, N.E.R.D, Incubus, Earth, Wind & Fire, Gucci Mane, Slash ft. Myles Kennedy & the Conspirators, Alice in Chains, Billy Idol and many more. Kings and queens of comedy Craig Ferguson, Iliza Shlesinger, Nick Offerman, Craig Robinson, and more round out the comedy portion of the weekend.

Please see below for the complete lineup.

“This year’s music and comedy announcement offer all of our guests a highly curated lineup that varies from the derivative mainstream festival circuit,” says KAABOO Chief Brand + Marketing Officer Jason Felts. “We are proud of KAABOO’s depth and diversity of talent which we bring to our guests each year. KAABOO offers something for everyone including a lineup of emerging bands that is always fun to see our guests discover.” 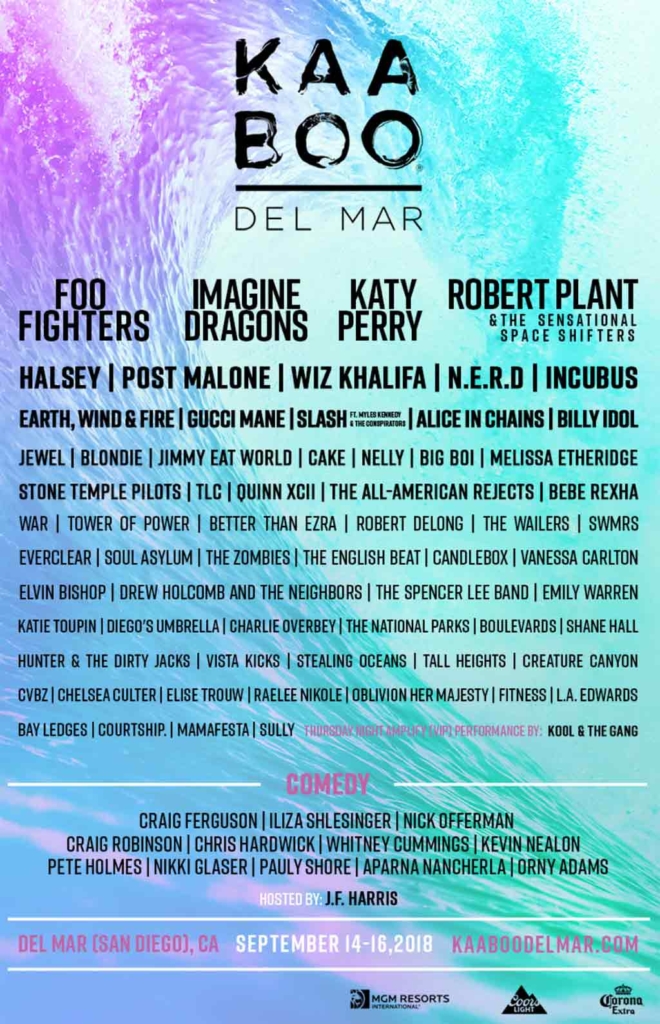 KAABOO Del Mar, which will happen over the Sept. 14-16 weekend, has just announced the daily

KAABOO Del Mar is coming up in a few months. The epic music and comedy festival