Mondo Cozmo hasn’t wasted any time positioning himself as one of 2017’s most promising new artists. With his new single “Shine” recently hitting #1 at Triple A Radio and breaking Top 25 at Alternative as well as his recent string of sold out shows in Los Angeles, New York and Philadelphia, Mondo Cozmo has just announced that he’ll be joining Bastille this spring on the North American leg of their Wild, Wild World Tour. Mondo Cozmo has also released two new tracks with accompanying music videos since December – “Sixes and Sevens” which he and his manager filmed in Mexico, and “Higher” which features the skilled artist, designer, writer, and actor, Paz de la Huerta (Enter The Void, A Walk to Remember). Those fortunate enough to snag an early ticket to his sold out show in Los Angeles can catch him at The Troubadour on March 1st, otherwise, a full list of Mondo Cozmo’s upcoming US Tour Dates and currently announced Festival Stops are listed below! 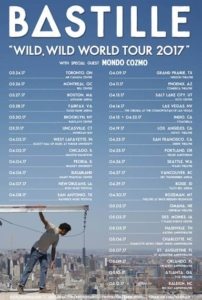 Van Morrisson has just announced a series of US tour dates. Lucky for Bay Area fans,

Primus will pay homage to prog-rock legends Rush this summer with a stop at the Greek Theater in Berkeley.

The name Phoebe Bridgers is one I seem to come across a lot these days. So when I was invited … More

The concept film to Madonna’s Madame X Tour debuts today. To coincide
The San Francisco Symphony kicks off its 2021–22 Season with a celebratory
Outside Lands has announced the 2021 Night Shows lineup. This year’s version
The Sounds’ performance that was originally scheduled for Slim’s on May 15,
This website uses cookies to improve your experience. We'll assume you're ok with this, but you can opt-out if you wish. Cookie settingsACCEPT
Privacy & Cookies Policy