If I tell you that Jimi Hendrix is an example to remember, you probably think… obviously. Hendrix is still believed by some to have been the best guitarist who ever lived, not to mention one of the most unique rock ‘n’ roll artists of all time. There’s a reason he still inspires artists today, as well as a reason why he seems to resurface sporadically as if the music-loving public always keeps him in the back of their minds.

It was only this past summer that Seattle put Hendrix back into national headlines by opening a park in honor of the late rocker. Promised for quite some time and once thought to be doomed to failure, the park is now open – and every inch of it is a testament to Jimi Hendrix’s life and legacy. It’s a $2.2 million project built in the shape of a guitar and featuring all kinds of designs reminiscent of Hendrix. And it’s meant, at least in part, to provide a place for kids and others to come out and get inspired to play music. It’s hard to imagine a better tribute to the legendary guitarist.

In a different vein, an interesting Hendrix tribute also emerged in online gaming sectors in late-2015. The Jimi Hendrix slot gaming experience was part of a rock-inspired trilogy by the developer NetEnt, and has been reaching a high volume of gamers. Fans of this genre know that thanks to the improvement of online slots and expansion to mobile devices, they can always find something to enjoy on the go. And that now means a handful of games based on classic rock groups and artists. The Hendrix game captures his aesthetic and also includes some of his hit songs as background music.

And of course, if you live in San Francisco or are familiar with the town, you don’t need a specific reason to recognize or pay tribute to Hendrix. He’s a palpable presence in town, to the point that some visiting the city even look into taking a Hendrix tour of sorts, stopping by his old house on Haight St. and taking in old performance spots like The Panhandle and Hippie Hill. 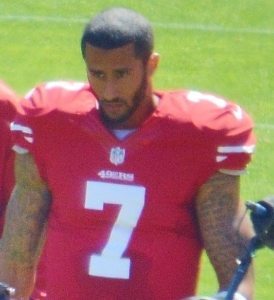 So, with all that said, of course Hendrix is an example to remember in the music world. But these days, his example actually goes beyond that. As was pointed out in a terrific article at the Washington Post, the link from Hendrix to former 49ers star Colin Kaepernick shines light on why black Americans’ patriotism often looks like protest.

This is not a purely political statement, but rather a reminder to consider famous protests in context. For instance, it’s important to remember that when Hendrix famously played the Star-Spangled Banner at Woodstock (the very anthem Kaepernick famously took a knee to), he did so as a form of protest. He was reminding the public of his own perception of the country of which he was a citizen and, by playing over sounds of war, making a statement on Vietnam. Broadly speaking it could be called a protest against injustice, racism, and improper representation – not at all unlike Kaepernick’s initial focal points (though without the specific aspect of police brutality).

Again, it’s not a purely political point, nor a specific commentary on the manner in which Kaepernick’s protest has blown up. But it’s certainly an interesting point. As we debate and consider Kaepernick’s influence, it’s worth remembering that famous black Americans have been making these types of statements for many decades, and much of the public has often misunderstood them.

Scorpions and Megadeth Bring Classic Metal Back to Oakland

With a rich history and humble origins that date back to 1971, Rasputin Music feels like a … More

The names of the Rock & Roll Hall of
WATCH “YUMMY” LYRIC VIDEO HERESTREAM “YUMMY” HERE    COUNTDOWN TO THE “YUMMY” VIDEO PREMIERE HERE
Coachella returns to the Empire Polo Club in Indio, CA
Sponsored Content The Black Lips and Bushmills rocked the
Pianist and singer-songwriter Ben Folds joins the SF Symphony
This website uses cookies to improve your experience. We'll assume you're ok with this, but you can opt-out if you wish. Cookie settingsACCEPT
Privacy & Cookies Policy